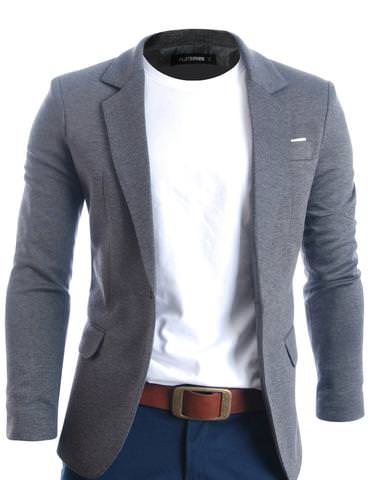 A blazer is a form of a jacket. A Blazer is more casual in their look than a jacket from a normal suit. Normally the only difference between a blazer and a sports coat is that these coats are tailored with more solid colored fabrics and are worn on formal occasions. Blazers, on the other hand, is made up of metal buttons, which reflect their belonging from the family of jackets. The type of fabric used in the manufacturing of blazers is durable in nature. This article will make you aware of how to choose the trendiest blazer for men, depending upon the occasion. So let’s start:

A blazer is a form of jacket that can be worn over a formal shirt in order to bring out the formal look required for a meeting. Blazers can be incorporated as a replacement of a formal suit’s jacket. The color of the formal blazer depends on the season that is worn on. In summers a light color blazer is more preferable over the dark one. On the other hand, in winters the color of the blazers should be dark and the shirt color worn inside should be light giving the look a contrasting effect.

A blazer for men can also be worn as a wedding attire. Different types of traditional, as well as an Indo-Western blazer, are available in the market. These blazers tend to bring the combination of Indian look with a combination of the western outfit. Bandhgala blazers are very common at weddings. Blazers are a trending wedding attire, and almost everyone is seen wearing one in the weddings.

A blazer can also be a type of party attire. Worn over jeans a normal t-shirt, a blazer can provide a classy and trendy look to a man. Bright color blazers are very trendy and are a preferred outfit worn by today’s youth as a party attire. Occasions like brunch, birthdays, gathering in pubs, reunions are some occasions where a person can wear a blazer and give their fashion a trendier look.

Blazer as a Part of Uniforms:

Blazers are also included as a part of uniform by many educational institutions. Blazer tends to give a classy look to the students and also provide them with a standout look. Different sports clubs and teams also have their respective blazers which have the logo of their team engraved in it. These are worn by the players and team officials whenever they attend an official team meeting.

Blazers are one of the trendiest attire preferably worn by men. Blazers can be worn in almost any occasion. They can be worn over jeans or a trouser, they can be worn over a shirt or a t-shirt with formal or casual shoes. Blazers don’t have any prerequisite in their wearing style. A blazer can give out a trendy and classy look to any person wearing it irrespective of the occasion.